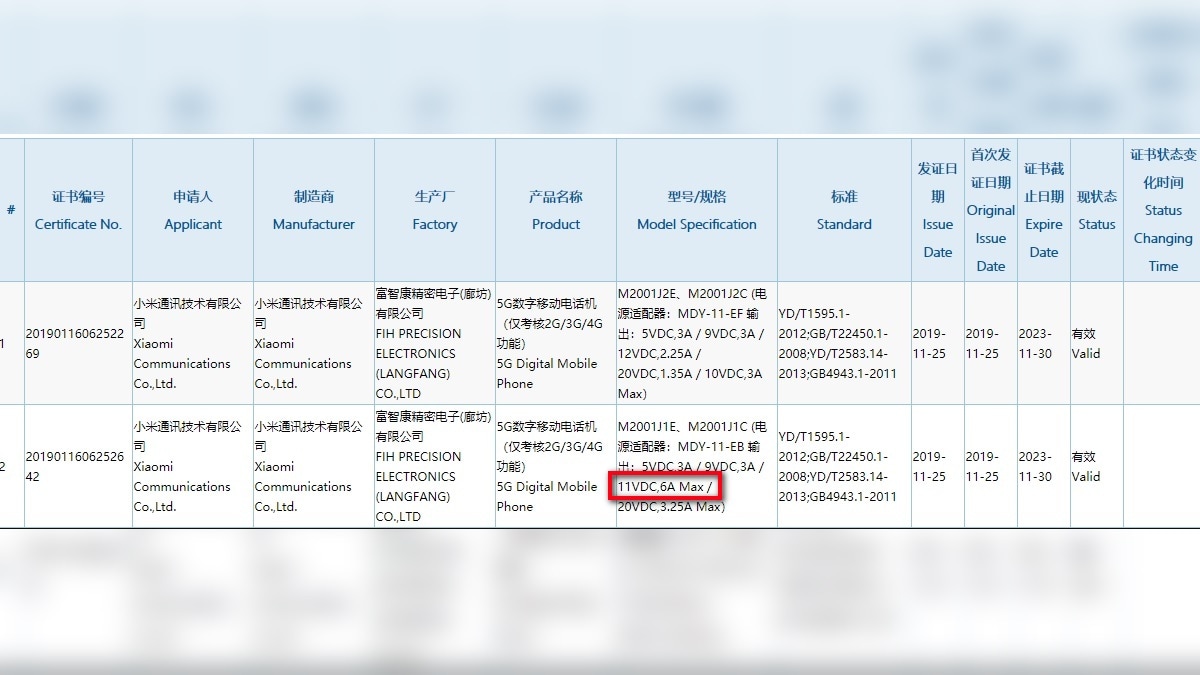 Xiaomi appears to be gearing up to launch more 5G smartphones that might debut after the Redmi K30 5G, which is set to go official next month. A couple of new Xiaomi smartphones with 5G connectivity support have allegedly received mandatory 3C certification in China. Notably, one of the phones is listed on the 3C database with support for a whopping 66W charging. The latter is the highest charging capacity we have seen on a smartphone lately, even surpassing the 65W SuperVOOC fast charging capacity that we recently saw on the Oppo Reno Ace.

The purported 3C certification of the two 5G phones from Xiaomi was first spotted by MyDrivers, but there is no concrete information regarding the commercial name of the phones or the series they will fall under. The Xiaomi phone carrying the model numbers M2001J1E and M2001J1C is mentioned as “5G Digital Phone” in the product field of 3C’s database, making it abundantly clear that the phone in question supports 5G connectivity. However, it is not known if it supports dual-mode 5G (SA + NSA) connectivity akin to the upcoming Redmi K30 5G that will go official on December 10.

But more notably, the 3C listing mentions that the Xiaomi phone with the model numbers M2001J1E and M2001J1C will support 11V/ 6A charging, which translates to 66W charging capacity. This will put Xiaomi at the top of the league, toppling the Oppo Reno Ace that made its debut earlier this year flaunting 65W capacity courtesy of the in-house SuperVOOC technology. While the edge gained by Xiaomi is just 1W, it does establish Xiaomi’s superiority in the smartphone charging capacity game and will go a long way in the marketing campaign.

The other Xiaomi 5G phone that carries the model numbers M2001J2E and M2001J2C maxes out at 30W. As for the identity of the two phones, they are tipped to fall under the flagship Mi 10 series that will be launched in 2020. Notably, Xiaomi is gearing up to introduce the in-house 100W Super Charge Turbo fast charging technology to its smartphones next year, including the Redmi-branded phones as well. The 100W Super Charge Turbo technology is claimed to fully charge a 4,000mAh battery in just 17 minutes, which is the fastest charging speed by a large charging on any smartphone out there as of date.

Nadeem Sarwar
Aside from dreaming about technology, Nadeem likes to get bamboozled by history and ponder about his avatars in alternate dimensions.